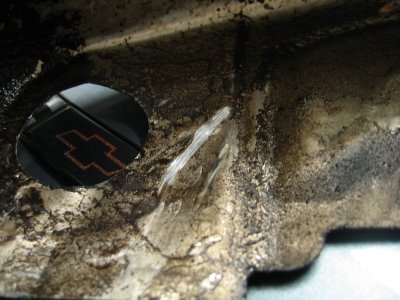 Well, we took a stab at trying to fix my noisy flywheel again and after a lot of praying and after lots of oil we got it going. 🙂

Juan didn’t want the Vette to defeat him so he came by after work to have another look. We were thinking the worst. A bent or cracked flywheel. We were also thinking that maybe the new bolt he put in there was sticking out to much and hitting the cover that goes below the flywheel. So we took it off, which also requires unbolting the starter.

The only clean part of the cover you see in the photo is where A bolt was hitting it. He put the starter back on and after starting and test driving the car the noise was gone so, Juan took a hammer to the thing and straightened out.

When it went back into the car the clatter was gone. whoo hooo!!! Thank God!

Oh, and no I didn’t clean this thing before putting it back on. I’m sure most would.