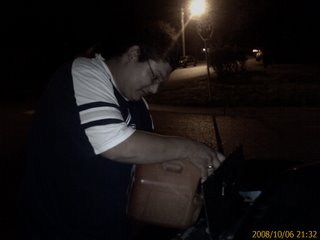 No, not out of Blogging gas. Out of gasolina!! Well, I had never gotten a flat on the road and I had never run out of gas before and within Six days I have done both!

After work, Juan was working on my flywheel problems and we thought WE got it fixed. That was not so because as I went to pick him up to get him some Pancakes for working and bleeding so hard I heard that dreaded sound return. I did not even make it to his house though. Within two blocks the Vette died! I ran out of gas!

I have run the Vette way below Reserve but maybe having her jacked up like that threw the gauges off.

After we put gas in it, and after Juan heard the sounds of the flywheel, he lost his appetite. :-(. But hey! At least now I am not that scurred to drive it to the shop.

And since it is dark out I am not sure if there is a black cloud over me.