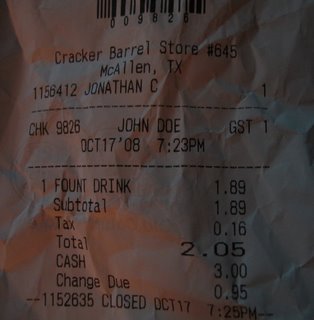 I love me some Mellow Yellow.

To bad they don’t sell it down here. I remember when I was a wittle kid they used to though. I fell in love with the drink in Dade City, Florida I believe.

Some time last year I got a case from the Laiklams and the Kincaids and what a flashback of flavor that was!

Not to long ago, up in Mission, TX they opened up a Cracker Barrel and wouldn’t you know it, they sell Mellow Yellow!! Or Yellow Mellow as the green waitress said. I have only made it out there one time though BUT tonite on the way to Wallbangers we cruised up there to go to the Candy Apple store and I asked Juan if we could stop by the Barrel to get a Mellow Yellow. To my surprise he did! The picture shows what I paid!! I didn’t get a picture of the SMALL glass. It was worth it though. Flashbacks are priceless! 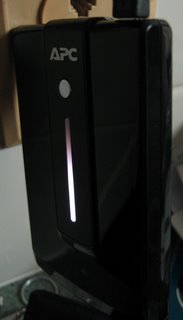 This other black thing is actually a USB Battery Pack for things like cameras, phones, PSPs, MP3 players and such. Picked it up at Circuit City with a gift card! It’s small and very light weight and made by APC, the World renowned maker of battery backup units for all kinds of equipment. Should work good is what I am trying to say.