It’s funny, with this ABAD we got going on I am always on the look out for Blog Material. I have a good funny story to tell but I don’t want to get dooced for it. So I will save that for the next fellowship.

It was a pretty uneventful, busy day at work. Got some rough news today at a meeting though. Cutting costs. Cutting pay for awhile :-(. I know what I need to do and start doing again faithfully. Tithing.

Towards the end of the day while discussing certain religious denominations with the big cheese my friend Eddie text me if I want to go to Wallbangers this evening, since he owes me. Thirty minutes later I finally manage to get the “yes” out. Dalia, his wife, who works with me, joked that he was only going to buy me fries because supposedly he wasn’t able to watch a complete movie on QSS, which is what I helped him with in order to get free Wallbangers. He tells me we would head out at 7:30 or 8:00. So naturally, I took a nap.

My phone was on the verge of death so it wasn’t ringing but when I finally woke up at 8:12 I saw a missed call and a text from them. So they came for me. BUT as I was trying to change, phone calls started to come in from left and right and my dying phone couldn’t handle it. I managed to answer one call and it was a nurse from work. I had to help a doctor with his PDA, which he uses for dictation, for about 15 minutes. Meanwhile, Eddie and Dalia, were waiting for me outside. Finally, we left. Wallbangers was great, as always.

On the way back, and on the final exit, and as I asked Eddie for permission to ask his 18 year old daughter out, we spotted something peculiar. See the photos below: 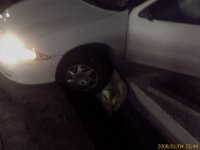 All I had was my camera phone. Now I know to carry my real camera with me at all times this month.

This couple had tried to pull in to the gas station but did not notice there was a HUGE gap between the concrete so it fell in. They were trying to push it out but it was front wheel drive so that was a no go. As we stopped to check it out the people offered Eddie five bucks to pull them out. He warned them that it was going to do some damage but they were too drunk to care. So Eddie tied the chain and yanked that little car out on the second attempt.

Needless to say, Eddie turned down the five dollar payment.