So today was dad’s birthday. Seems like for every holiday I get him a movie or movies. This year was no exception. I did, however, get him a cool Eddie Bauer mini-light and knife for his keychain. Sure, it is not a Swiss Army but Eddie Bauer can put his name on trash and it will still be worth a double take.

I got him the movie Once Upon A Time In The West and he seemed thrilled to get it. Double disc set. Mom got him an Antonio Aguilar CD. I think that was the guys name. I can’t really read it from the pictures I took. 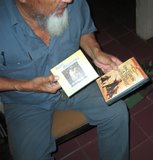 He said he liked the light and the knife. I watched him put it on his keychain so hopefully he didn’t take them off as soon as I left the house. ha.

Also included a picture of my mom and dad in an embrace and of him and I standing tall.

Happy birthday dad! And as it turns out I was born when he was 32 so I told them I got two years to have a kid of my own before its to late. No pr