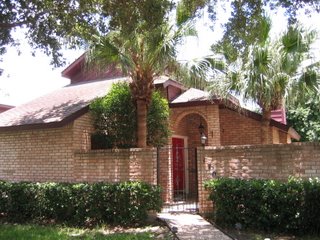 So Juan, DeeDee, their family, Carlos and I took off to South Padre Island tonite to grab some fish tacos. Carlos’ wife, Lucy, was at school so she didn’t go. Sorry Lucy! Anyway, we come back and I am here at home and I am getting ready to watch the new remake of Halloween, but I am reading blogs and comments. It’s about maybe 10:30 or so. Well, all of a sudden my doorbell rings.

What sucks is that both my porch lights are not working, so I can’t look out to see who it is. So I just open the door. There is no one there but I think I hear something. I come back inside and after a minute or two it goes off again. I go out and nothing. I then start looking out my dens window. It goes off but I don’t see anything.

I have three doorbells. One in the back and two in the front. The one in the back rings different so I know its the one in the front. One of the doorbells in the front is visible through my dens window. It is just outside the gate. You can see the two front doorbells in the picture if you click it to make it larger. No one was there when it went off when I was looking out and I can’t see the other one. I then text message my neighbor to see if it is him or his kids or his sister whom I work with. He says no.

He then comes out of his house to turn on his lights and he hears my doorbell go off while he is out front but he sees no one. This makes me think something is up with my doorbell. I then text message my friend Rob and ask him if he ever heard of doorbells going off by themselves. He says no. I lured him over to my house by burning him the Halloween movie. I ask him not to ring the doorbell when he gets here.

A few minutes pass, about the amount of time it would take Rob to get here and my doorbell goes off. I go to the door and say “Yo!” I hear nothing. I look out and I see a opossum walking. Surely, if someone was there the opossum would have not been walking all cool. I call Rob on his mobile and he is still at home. He says he is coming right over. As I hang up the doorbell goes off.

As you can see in the picture, above the gate there is a light that is supposed to be turning on automatically at dusk but its not. When I moved in that light nor the doorbell were functional. My friend George fixed that for me. Rob and I replace the bulb and it still won’t come on. So we start thinking that because of all this rain it might be shorting out the doorbell.

The doorbell never went off while he was here. We then pressed the buttons and they all worked. It has been over an hour since he left and it still has not gone off.

I am thinking, hoping that its the doorbell shorting. I got one of my porch lights working so that gives me a little peace.

Hopefully I can sleep tonite.