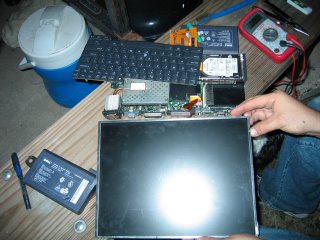 So we have all seen those nifty digital picture frames made out of old laptops. I wanted something samilar, but I want it to be a functioning Laptop.

Javier‘s Dell Dimension CPx recently became a paperweight so I tried to get it off of him. After weeks of giving him numbers he would not budge. Mind you, my prices were dropping as the days went by. 🙂

Since he is about to have a baby and because he doesn’t have a digital camera I decided to buy him one.

My plan was to offer a trade for the digicam and if he said no I would still give him the cam. But to my surprise he said yes and we traded. I also bought him lunch for two days.

I completely tore apart the laptop and still nada. I then noticed some corrosion near the power connector and proceeded to further take things apart. I read online about some similar issues with these laptops. It was going into a power loop with the screen not coming on at all. I also noticed some corrosion on the CMOS battery which was hiding under the palm pad. Following directions on the web I let it sit for a few days. 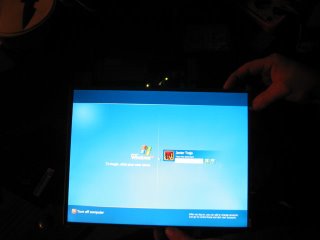 But even then there was still no power. Rob stopped by the house today and after seeing the corrosion by the power connector he was sure he had something to clean it up. He took the mobo and power with him and after a few minutes he called saying he had it up and running. I went over there with the screen and battery and tried to get XP up. I forgot the keyboard so Rob rushed back to my place on his Kawi and even though it took him five minutes to get back he bought dirt as soon as he got near his driveway. Sorry Rob! It’ll buff out. 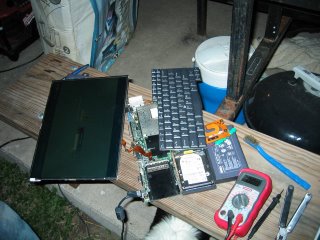 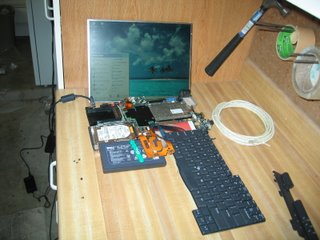 After fiddling with it we got XP up and running! I broke the news to Javier by calling him and asking for the password. It took a few seconds for it to click that it was up. It was funny. I recorded it but he you can barely hear him.

So hopefully this week it will all come together.