Several months ago (maybe a year), I purchased a Dremel Stylo. It’s a lot smaller than your standard Dremel. Meant for detail carving or etching. It’s meant to be able to hold like a pen. I only ever etched one thing with it.

The missus was recently gifted a glass coffee mug she absolutely loves. She says it keeps her coffee very warm. All it needed was her name on it. So I broke out the Stylo and started practicing on some mason jars. I couldn’t get the thing to etch at all. The Stylo came with a diamond tip for etching but it wouldn’t do anything to the jar. I even tried another glass, but nada. It must be the tip.

I’ve been gifted some Dremel accessories and I’ve boughten accessories so I went through my stash and found a carving and etching kit that included the same diamond bit. It easily etched the mason jar glass!

With a working tip I then knew I could etch her name on it easily. Lots of tutorials I saw said to print the template and tape it to the inside of the glass, but because the glass of the mug is so thick, the template was being distorted. So I taped it to the outside and began to etch.

Here is the full video:

Get your own Stylo here:

It came out pretty good but when you zoom in you can see it could be better. 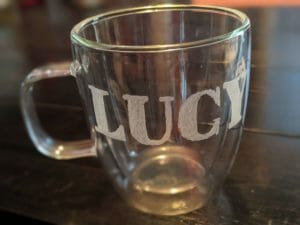