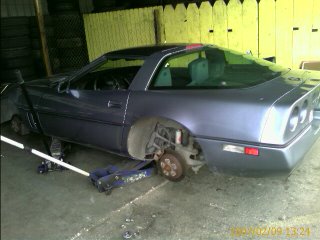 So, I almost never make new years resolutions and I know its already February but I stated this back in January.

This year will be the year that I drive my Corvette as much as I did back when I got it back in ’99.

It has proven not to be as easy as hopping in and going. My first problem started when it wouldn’t start. A simple jump start solved that but then it started to happen pretty frequently until it didn’t want to start anymore. Luckily, it was in my driveway where it died. I had just jump started it, reversed it out of the garage and then the whole car went dead in the driveway. A jumpstart with my truck nor Rob’s battery charger would start it. Had to push it in. So there it stayed for a few days. I removed the starter and had it checked but it was good. Had to have Rob put it back in because I just couldn’t do it. I also replaced the positive battery cable. 70 dollar battery cable!! Rob suggested it was the battery that was to dead to jump start so we brought over his Optima battery and the vette started perfectly. So we went out and bought a new battery.

And new problems arose. Firstly, my right headlight would not flip all the way open. Secondly, my alarm was not arming, and Thirdly my stereo opened half way and quit working. (its a hide-way kenwood stereo). I dislike seeing Corvettes with the lights up so this was a big no no. My dad and I had repaired this headlight motor when I first bought her but now it seems to have broke again. In fact, the only way I could get this headlight to move was to switch the connection to that of the left headlight. So, that tells me that I have a bad headlight motor relay and bad motor. So, I had to leave the headlights up because it is to costly to replace the module and repair the motor at this time. I then took it into D-Tronics where I had the alarm and stereo put in. My alarm had went into whats called Valet Mode when we switched the battery. In Valet Mode the alarm will not arm but the doors still lock and unlock with the key. This feature is used when working around the car and you don’t want the alarm going off all the time. A simple press of a button places the alarm out of Valet Mode. I couldn’t find this button before but they relocated it. And it was a burnt fuse behind the stereo that prevented that from working. All the work was covered under warranty so it wasn’t a complete waste. So this past week I have been driving the car daily.

Yesterday I took the day off and I planned on changing the spark plugs, balancing the tires, and doing a wheel alignment. It did not go ALL as planned. I only managed to change 7 out of 8 spark plugs. I couldn’t get one of them out. So that one stayed on until I could have someone try it. I got the tires balanced but decided to put off the wheel alignment til next week. And I am glad I did because I was going to take it to a shop that I now found out is not that great. So, today I was telling Rob about my spark plug so he gives it a go but the plug broke in the socket. So now the vette is rendered a paper weight until we can get the rest of the plug out.

It is turning out to be a pretty interesting Year of the Corvette but, it is all worth it because I love driving her. It cheers me up and Lord knows I need that.